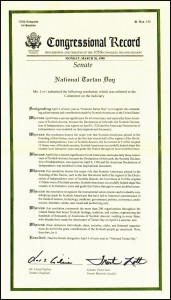 Whereas this resolution honors the major role that Scottish Americans played in the founding of this Nation, such as the fact that almost half of the signers of the Declaration of Independence were of Scottish descent, the Governors in 9 of the original 13 States were of Scottish ancestry, Scottish Americans successfully helped shape this country in its formative years and guide this Nation through its most troubled times;

Whereas this resolution recognizes the monumental achievements and invaluable contributions made by Scottish Americans that have led to America’s preeminence in the fields of science, technology, medicine, government, politics, economics, architecture, literature, media, and visual and performing arts;

Whereas this resolution commends the more than 200 organizations throughout the United States that honor Scottish heritage, tradition, and culture, representing the hundreds of thousands of Americans of Scottish descent, residing in every State, who already have made the observance of Tartan Day on April 6 a success;

Whereas these numerous individuals, clans, societies, clubs, and fraternal organizations do not let the great contributions of the Scottish people go unnoticed:

Now, therefore, be it Resolved, That the Senate designates April 6 of each year as “National Tartan Day”.